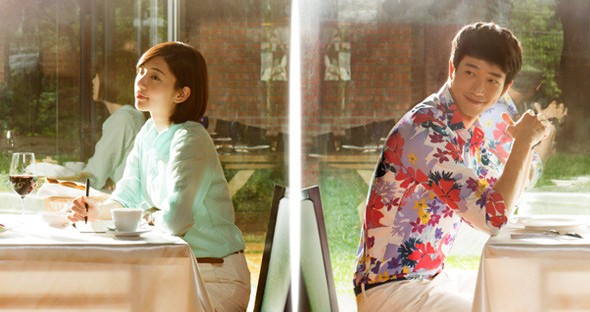 Food! I love food, and food and cuteness were Pleasantly Surprised (aka Love Myself or You?) strong points. I really liked this one despite the ups and downs. Although it got very melodramatic, each dramatic plot arc never carried on for too long and was also resolved within an episode or two. A great drama for those who like their food, cute couples, nice guys, and can tolerate some melodramatic tears.

The Chinese name for Pleasantly Surprised is 喜欢·一个人 (Xi Huan Yi Ge Ren), which is a much better title that can be read as either “(I) Like Being Alone” or “(I) Like Someone” that “Pleasantly Surprised”just doesn’t capture. It’s so suitable because this drama is all about liking being alone vs. learning to love someone. It’s also about food.

Du Kai Qi is a chef at Figaro Cuisine, a French restaurant. She’s used to living a very independent life and has a hard time connecting to people because of her deadbeat father who ruins all her relationships by trying to borrow money from everyone she knows. One day, she loses a contest to become the sous chef of Figaro Cuisine, and she blames Ah Jie, the new intern who judged the contest. That same day, she finds out that she has to take care of her nephew Xiao Yi, because his father doesn’t want him anymore and his mother, Kai Qi’s sister, passed away. What Kai Qi doesn’t know is that Ah Jie is her childhood friend, Fu Zi Jie, who also happens to be Louis, a chef she greatly admires after eating several of his dishes at a restaurant. Ah Jie has been convinced by his parents to stay in Taiwan for a month as an intern at his father’s restaurant. After a month is over, he’ll return to Europe, where he has been living for the past ten years. Ah Jie’s goal is to keep a low profile and leave after a month is over, but he’s shocked to see that Kai Qi has become a cold, angry woman after so many years apart. He makes it his goal to make her come out of her shell and “learn how to interact with people.”

As a show centered around a restaurant and cooking, Pleasantly Surprised naturally has a lot of great food. It also has a lot of great characters and character development, not only for our leads, but also for all of the supporting cast. They are the reason why I became so attached and invested in this show and all the relationships. All the characters are quirky and lovable. Each have their own flaws, but no one is purely antagonistic or one-dimensional. Seeing their growth and development throughout the show–especially Kai Qi and Ah Jie–is incredibly rewarding.

Unfortunately, Pleasantly Surprised did have a lot of drama and melodramatics. The first half of the show is great, but around halfway through, right about when the main couple finally get together and there are still 11 episodes left, I knew that the show would start taking off in a direction I probably would not like. And true to my expectations, that’s what it did. The second half is full of dramatic plot twists, but I think the extremity is handled well, in the sense that drama is never prolonged (instead we just get new, fresh drama), and that our characters grow so much because of these extreme situations. I hate it when characters’ characters are sacrificed in order to create drama, but in Pleasantly Surprised every action and reaction is believable within what we know of who our characters are.

I only wish that the show continued to consistently keep up the food aspect, but unfortunately the food was shoved aside in favor of drama in the middle of the show.

I am a huge fan of both Jasper Liu and Puff Kuo after this. They made Ah Jie and Kai Qi into lovable, multi-dimensional characters. I think it’s very easy for coldness in a character to come out flat and wooden on-screen (eg. Suzy’s performance in Dream High), but Puff Kuo added a lot nuance and personality to the coldness.

I love their bantering, playful chemistry, which is so different from the electric, fiery chemistry between Baron Chen and Megan Lai in Bromance, which I just watched before this, but compelling in its own way.

Speaking of Bromance, as a brief aside, it was pretty funny seeing Sean Lee here in comparison to Bromance. His character here, Yong Qian, is arrogant, at first a douchebag, and full of air, but in Bromance is a puppy-loving, nicest-man-ever. And speaking of puppies, Jasper Liu is adorable and quite like a puppy, which is one of my highest compliments (one bestowed upon the best, such as Grant Gustin.) Whenever he smiles, my heart melts a little.

Kai Qi and Ah Jie are one of my favorites couples because they are so beautifully matched and complement each other perfectly. Ah Jie is normally a ray of sunshine, all cheerful and playful and happy, which counters Kai Qi’s cold unhappiness, but Ah Jie has his moments of darkness, and Kai Qi has her moments of light, and in those moments they are there for each other, and empower each other, and that is what makes them so perfect and beautiful for each other. It’s so great to see relationships build naturally off of happiness and supportiveness. And nice guys. It’s also great seeing nice guys, because they don’t finish last!

Jolin Chien’s character, Cheng Hao Wei, also deserves a shout-out for being one of the best second leads to grace dramaland. He is incredibly supportive of Kai Qi’s happiness, is never the manipulative, jealous second lead that we hate, and even tries to help her resolve her relationship issues and get back together with Ah Jie. His teaming up with Xiao Yi to get Kai Qi and Ah Jie together is one of the cutest things I have ever seen.

I really loved Pleasantly Surprised in a way that was so dependent on the characters and my emotional attachment to them. Despite the tears, it was overall a very light and happy drama, with great comedic timing and relief of tension from the supporting cast.