Lu Qiao Chuan meets with Ye Ji Ping in his office to handle some class president duties. Lin Luo Xue and Ren Yi Fan soon show up — it turns out this is why Qiao Chuan called Luo Xue earlier, because she’s vice president, and they have to write an article on what the students in their class did for summer break.

After Professor Ye leaves, Qiao Chuan breaks the news to Luo Xue (and Yi Fan) that Yi Xin has left the country. Yi Fan reads Qiao Chuan’s note and notices that he left a very similar message in his high school yearbook message. He teases Qiao Chuan for his lack of creativity, writes a note for Yi Xin, then leaves.

Luo Xue doesn’t really react to the news about Yi Xin, which Qiao Chuan notices. He guesses that she knows more about Yi Xin’s situation than any of them, but asks her to hide it from Thirteen.

Yu Hao makes a bet with Xiao Hai Yang, daring him to stand up and say, “I like you” to Zhong Bai in front of the whole class the moment she walks into the room. Hai Yang says he will definitely do it.

Qiao Chuan sits down next to Shu Ci and tries to break the news that Yi Xin has left, but it turns out she already knows.

Zhong Bai darts in to the room. Hai Yang stands up, ready to make his confession, but she has eyes only for Qiao Chuan and exclaims in front of everyone how much she missed him. She bought him lunch and invites him out to eat. Qiao Chuan agrees and they leave the classroom while the class titters behind them. Hai Yang looks defeated while Yu Hao asks for his money. 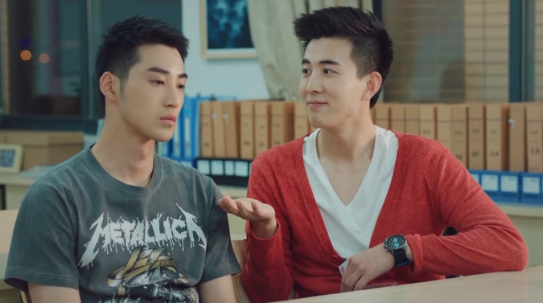 Ye Ji Ping arrives in the classroom, and noticing that Thirteen hasn’t arrived yet, takes the opportunity to announce Yi Xin’s departure. Unfortunately for him, Thirteen arrives just in time to hear the announcement. He asks how long she’ll be away — four years — and then calculates the number of days and says that he can wait that long.

Ye helpfully tells Thirteen in front of the whole class that Yi Xin left a letter for him that Qiao Chuan now has. Qiao Chuan claims he left it in their dorm room. Luo Xue speaks up and says that the letter didn’t contain anything too important — Yi Xin wanted him to know that she left with her whole family (as in, she won’t be coming back). Yu Hao watches rapturously.

Ye tells them to focus and announces his second piece of news: they have a new student in the class, Xu Lian Qiao. He calls the new girl into the classroom and asks her to introduce herself. She just restates her name, then grabs a chair and situates herself right next to Hai Yang. She asks Yu Hao if Hai Yang has a girlfriend; upon finding out he doesn’t, she declares that she will be his girlfriend, to Shu Ci’s shock and dismay.

After class, Hai Yang is still shell-shocked from his complete failure to confess to Zhong Bai in time. Yu Hao has to physically push him out of the classroom. Zhong Bai and Qiao Chuan leave together and invite Shu Ci to leave with them. Thirteen and Luo Xue are left alone in the classroom. Thirteen confronts Luo Xue, saying that she must have known when she went to find him “that day”. He asks why she didn’t let him see Yi Xin one last time. “You tell me,” she responds, then leaves. 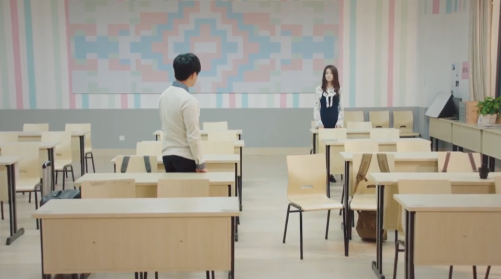 Pan Zhen continues to block the main entrance to the dorm building. Hai Yang grabs the (still half-empty) beer bottle out of his hand for himself. When Thirteen comes by, Pan Zhen tries to block his way, but after a brief stare-down, he concedes.

Back in the dorm room, Qiao Chuan tries to get Thirteen to write a note for Yi Xin, but he refuses, saying the past is meaningless. He leaves the dorm. 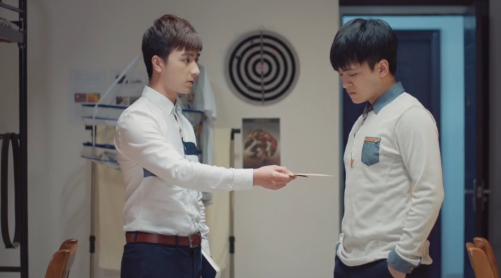 Xu Lian Qiao replaces Yi Xin in the room that Zhong Bai, Luo Xue, and Shu Ci share. Zhong Bai and Luo Xue watch her curiously, wanting to know how she knows Hai Yang. Shu Ci is the only one who doesn’t seem curious, and Xu Lian Qiao calls her out on it.

A couple hours later, Thirteen still hasn’t returned, so the three roommates split up and head out to look for him. Hai Yang steals another one of Pan Zhen’s beers and drinks alone in a classroom. Yu Hao looks for information on Xu Lian Qiao. Only Qiao Chuan seriously looks for Thirteen. He finds him at an amusement park, turning on a ferris wheel. Thirteen tries to convince Qiao Chuan to let him ride it just once, saying that a certain someone’s wish was to ride the ferris wheel with him on New Year’s, but he stood her up. Pan Zhen is the first person he’s been jealous of, because he actually dated Yi Xin.

Qiao Chuan tries to give Thirteen the letter from Yi Xin, but Thirteen has already guessed that she’s asked him to do two things: the last two things on the list that they promised to do together. Feeling sympathetic, Qiao Chuan breaks the lock on the ferris wheel gate so Thirteen can ride the wheel guilt-free. Thirteen deadpans that he could’ve just hopped the fence — there was no need for Qiao Chuan to commit a crime.

This episode was a little too faux angsty/dramatic for me. The show seemed pretty conscious of it and poked fun at itself, but it still felt so slow! I could’ve done with a little less Luo Xue and Thirteen staring solemnly at each other/nothing, though I am curious about the sudden relationship change between Zhong Bai and Qiao Chuan. I still really dislike how Zhong Bai turns into a simpering mess whenever she’s around Qiao Chuan.