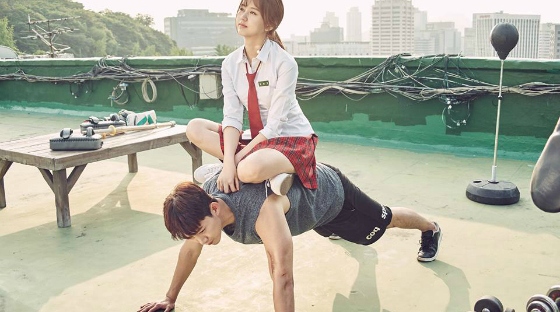 While at home for Thanksgiving break, I decided to jump back into Korean-drama-land for a bit and binge watched Bring It On, Ghost! This horror-comedy-youth romance was cute, light-hearted, and had enough laughs to make up for the creepy moments. It was a bit weak in terms of plot (so many holes and inconsistencies!) but overall a solid watch.

As a disclaimer: I am NOT a horror fan at all and easily get scared by the most basic of scary music and jump scares, so I’m a bit surprised that I made it through the whole drama watching by myself. That speaks to the level of actual “horror” in Bring It On, Ghost! It was manageable for me, and those who actually enjoy horror will probably find it light on scary elements. The show started off very light, and escalated a bit in creepiness in the second half of the show, but there was enough humor and comedy to balance out the horror.

Bring It On, Ghost! features Taecyeon as Park Bong Pal and Kim So Hyun as Kim Hyun Ji. Bong Pal is a smart college sophomore who keeps to himself and can see ghosts. He works as an exorcist as a side job, against the wishes of his mentor, monk Myung Chul (Kim Sang Ho), and has a goal of saving up a lot of money for some unknown reason. Hyun Ji is a ghost, a high school senior who has been dead for five years. She can’t remember anything about her past, but when she gets a flashback after accidentally kissing Bong Pal, she fixates on him and tries to get him to help her remember more. The show also features Kwon Yool as Joo Hye Sung, a well-liked professor whose handsome facade hides something darker and more mysterious, and David Lee and Kang Ki Young as Kim In Rang and Choi Cheon Sang, Bong Pal’s seniors in college who try to catch ghosts on video as part of their failing, two-member club, and who offer most of the show’s comedy.

I like how the show is set up in a very episodic format, with almost every episode featuring a different ghost/exorcist story that Bong Pal tries to tackle, and the episodes tied together by the overarching plot and mystery of Bong Pal and Hyun Ji’s pasts.

Kim So Hyun really carries the cast with her performance as Hyun Ji and is one of the main reasons why I watched the drama in the first place. Hyun Ji as a character is refreshing to have in drama-land. She’s sassy and bold and not afraid of making the first move, which is fun to have in a genre where the women are usually passive objects in a romance.

The plot itself is a bit loose, and is occasionally nonsensical and cringey (in the way that all K-dramas can be). The drama of the main plot is really played up, but I found it predictable and not nearly as dramatic as the show seems to build it up to me. The ghost lore itself is also kind of confusing and inconsistent. Sometimes ghosts have reflections and shadows, and sometimes they don’t. Sometimes it seems like the ghosts can drown or get sick… but does that really make sense? Aren’t they ghosts? And then at one point Bong Pal goes running around the city looking for a ghost. But that just seems kind of bizarre because, well… ghosts can just disappear and not want to be found. Does running around to physical locations make sense? Of course, not everyone cares so much about this nit details when watching a drama, but for those of us who do, it can be a bit disconcerting.

Still, Bring It On, Ghost! is one of the better dramas out there. It’s cute, it’s fun, the romance is healthy, and while there are some of your usual drama tropes, it avoids being overly cliché. Worth a watch!