He Luo shuts herself in her room and cries. Then she goes to the manga cafe and continues to be depressed. Brother Wang tries to cheer her up, comparing her situation to Kino and Xia Er from the manga she was reading. He tells her that Zhang Yuan has been asking after her. She doesn’t seem to be in the mood to listen and heads home. 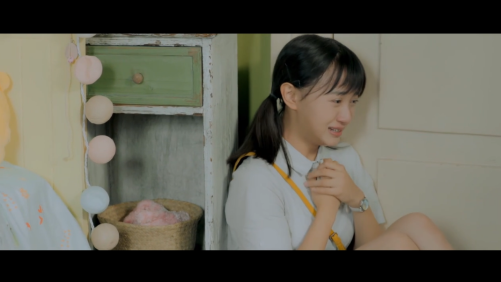 When she gets home, she overhears her mother and uncle talking about her and Zhang Yuan. Her uncle mentions that he talked to Zhang Yuan the day before the gaokao. He Luo storms in angrily, demanding to know what happened. Her mother tries to appease her with a gift, but He Luo doesn’t want it. She blames her uncle for sabotaging Zhang Yuan’s chances of getting into Huaqing and calls him and her mother selfish.

He Luo tries to call Zhang Yuan but he doesn’t pick up. Her mother convinces her to talk and admits that she’s afraid of He Luo falling in love too early. She asks if He Luo has really thought through what it’ll mean to be in a long distance relationship for four years.

He Luo goes back to campus and up to a rooftop, flashing back to a day from the school year when she sent Zhang Yuan on a scavenger hunt for his birthday. It led to this very same rooftop where she hid a pop-up birthday card for him. He had written “Thanks ♥” in chalk on the rooftop, and in the present, He Luo smiles nostalgically at the faded letters.

Teacher Lin spots He Luo and sits down with her to chat. She shows off her new engagement ring, and says that she and her fiance were high school sweethearts who were long distance for several years during college and for a couple of years afterward. When He Luo says that Zhang Yuan is refusing to see her, Teacher Lin says that she’ll get him to come out. Now that He Luo has graduated, she can be her friend instead of just her teacher.

Zhang Yuan tries to enroll in a remedial gaokao class (so he can retake the test the next year) but his high score catches the teacher’s eye. He’s just two points shy of getting into Huaqing, and his score is well above the threshold for first tier universities. She encourages him to consider enrolling in a university instead of retaking the exam a year later. Mothers nearby take notice and make a fuss over how high his score is, telling him not to waste his time when he has a score that most students would be envious of.

He Luo and friends meet up with Teacher Lin at a restaurant to celebrate her engagement. Zhang Yuan was also invited but hasn’t shown up. Just when they’ve given up on him showing up, he appears.

Teacher Lin tells He Luo and Tian Xin to look after each other when they’re in Beijing while Zhang Yuan looks away. She tells Yun Wei to also take care of herself, since she’ll be all alone. She doesn’t have as many words for Cheng Jie or Chang Feng since they’re not going to college, but Chang Feng reassures her that he knows college isn’t for him and has a different path in mind, and Cheng Jie tells her that he’s way different that Chang Feng because he has a personal goal he wants to achieve. Everyone stares at Zhang Yuan, waiting for him to speak about his future plans.

He admits that he wanted to retake the gaokao, but then decided to just enroll in Haicheng University. Chang Feng is delighted by this news, because that means that he can hang out more with Zhang Yuan. Teacher Lin says that she hopes they will each be able to follow the path of their own choosing. He Luo says cheers to this, then pointedly clinks glasses with Zhang Yuan.

They all head to campus to take some photos with Teacher Lin. At first, Zhang Yuan stands on the end, but Teacher Lin says that he’s too tall and tells him to stand behind her and He Luo. When the picture finally gets taken, He Luo is caught looking slightly back at Zhang Yuan.

Afterward, while the others mess around with the camera some more, Teacher Lin pushes He Luo toward Zhang Yuan, forcing them to talk. He Luo tells Zhang Yuan about how Teacher Lin and her fiance were long distance for six years, but this doesn’t seem to encourage him. Instead he says that he wouldn’t want to hold He Luo back for so long. There are better people than him out there, he responds, and then walks away, leaving He Luo alone.

Her friends come over to see what’s wrong, and He Luo says sadly that Zhang Yuan doesn’t want to be with her anymore. Cheng Jie says that she should chase after him. It’s not like her to give up and she’ll regret it for the rest of her life if she doesn’t. Everyone else agrees, and He Luo starts running after Zhang Yuan.

Zhang Yuan lies in bed at home, staring at the ceiling. He gets a phone call from He Luo, which he ignores. He Luo starts yelling at him from the courtyard of his apartment building. He continues to ignore her. She pounds on his door, shouting that she knows he’s inside. He covers his ears. When she finally goes away, he breathes a sigh of relief.

He’s still in bed when it gets dark, but finally sits up and looks out the window. Something on the ground catches his eye and he goes out to investigate. He Luo has spent all afternoon drawing out a cartoon in chalk all over the courtyard. It’s the story of their friendship and relationship.

Zhang Yuan finds He Luo in the arcade, angrily playing their video game. He sits down next her and challenges her to beat him.

In Summer Records (the manga), Xia Er clings to Kino in a desperate hug as he fights against turning into a demon. He tells her to leave him be, but she refuses. Eventually his transformation stops and he stays human.

In the present, He Luo defeats Zhang Yuan in the video game. He turns to her and promises that from now on, he’ll listen to whatever she says. She hugs him and starts bawling, asking why he didn’t come outside when she was drawing. He gently teases her about her drawing skills and tells her not to cry, then hands her the admission letter from Huaqing, saying she shouldn’t just throw it around so carelessly. This sets her off bawling again — she doesn’t want to go to Beijing without him.

Zhang Yuan takes He Luo’s hands and says that four years is nothing compared to being together for a lifetime. She makes him swear that they’ll stay together forever.

Uh-oh, did anyone else get bad vibes from that last bit when He Luo makes Zhang Yuan swear to never break up? I feel like those kinds of words are a kiss of death in a drama and signal inevitable break-ups and heartbreaks.