In this episode of Stand By Me 2, we return to the start of the semester. Zhong Bai and Lu Qiao Chuan’s relationship is now an open secret, and Xiao Hai Yang and Lin Luo Xue are left to deal with the aftermath of being unwanted. Meanwhile, Gu Yi Xin’s absence continues to affect Thirteen, and we get to learn a little more about the mysterious Xu Lian Qiao.

A few weeks into the first semester of school, Lin Luo Xue and Lu Qiao Chuan walk by each other. It’s a little awkward because Qiao Chuan doesn’t say “hi” until after they walk past each other. They make a bit of small talk about the club recruitment fair later in the day, then finally broach the topic of Lu Qiao Chuan dating Zhong Bai. Luo Xue wishes him well in his relationship with Zhong Bai, but her smile drops when she turns away.

She meets up with her roommates Zhong Bai, Li Shu Ci, and Xu Lian Qiao. They gossip a little about the club recruitment fair. Zhong Bai is about to ask Xu Lian Qiao some questions, then thinks better of it and switches to Shu Ci. Xu Lian Qiao doesn’t say anything and instead just observes each of them, then labels each one with an observant phrase: Zhong Bai is “cute”, Li Shu Ci is “pretty but a bit dumb”, and Lin Luo Xue is simply “a woman”.

All the clubs set up their tents and try to recruit new students. Xu Lian Qiao shows up at Xiao Hai Yang’s tent. His former vice president recognizes her as the former vice president of the drama club and a third year student. (So she does exist!) Xu Lian Qiao declares she’s there to keep her boyfriend company. She pulls Hai Yang over by the arm against his will and leans her head on his shoulder.

Hai Yang tries to ignore her but she’s persistent. But she finally leaves because she has her own business to take care of. Everyone else watches with amusement. 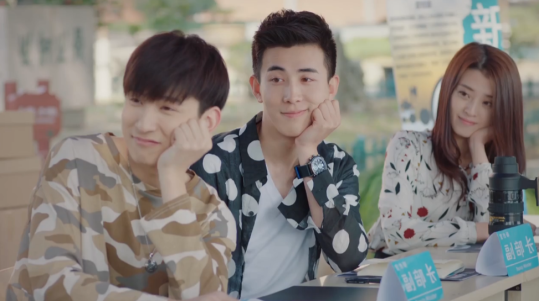 Zhong Bai, Lu Qiao Chuan, and Ren Yi Fan attempt to recruit members without success. Next door, Thirteen continues to refuse to speak — Zhong Bai observes that he hasn’t spoken since he found out the news about Yi Xin.

During some downtime, Xiao Hai Yang and Lin Luo Xue commiserate in their similar romantic failures regarding Zhong Bai and Lu Qiao Chuan. Hai Yang cringes at the memory of declaring to Qiao Chuan that he would openly compete with him for Zhong Bai, when they had already been dating for a while, unbeknownst to the rest of the class. Lin Luo Xue has a similarly cringe-worthy memory of flirting with Lu Qiao Chuan on the first day of school. They agree to go drink together.

Xu Lian Qiao is president of the drama club now and holds auditions. They’re mostly disappointing, until Li Shu Ci shows up. Lian Qiao’s vice president describes a familiar scene for Shu Ci to act out: imagine that she’s in love with someone who starts dating someone else, and then she runs into him on the street. Shu Ci looks at them for a moment, her expression growing sad, then turns away and says, “Forget it, I’ll try somewhere else.” It’s not necessarily acting, because she really just wants to go elsewhere, but she receives Xu Lian Qiao’s seal of approval and makes the club.

Yu Hao and Pan Zhen are fighting over couch space when Thirteen and his lackey sit across from them. Yu Hao tells Thirteen that Pan Zhen has gone crazy and believed that Gu Yi Xin was sitting right there. Thirteen wanders off and comes back with a stool. Pan Zhen and Yu Hao think he’s going to be violent, but then they realize that he’s just trying to communicate silently. His lackey translates.

Ren Yi Fan wanders around, having let Zhong Bai and Lu Qiao Chuan get lunch without him. He finds Lin Luo Xue and they chat for a bit, teasing each other about their respective single statuses. Ren Yi Fan comes up with a bet, saying they should each pick an “impossible” person for the other to try and seduce. Whoever loses has to publicly declare themselves unworthy of being the other’s match. Lin Luo Xue agrees and picks Xu Lian Qiao for Ren Yi Fan. Ren Yi Fan picks a guy in his class named Liu Wen Shu who had his former girlfriend cheat on him with Ren Yi Fan.

Fun fun fun! Luo Xue and Yi Fan’s interactions are always so fun to watch. They’re delightfully snarky with each other and I’m excited to see how this bet they made with each other goes…

I liked this episode a lot because it’s a return to the best parts of Stand By Me: lots of banter and quirky humor. This show is hard to recap because like any good comedy, the plot is pretty simple, but it’s the comedic moments that you have to watch in order to get and they aren’t so easily translated.