Zhong Bai cheerfully prints out the 37th version of her script and presents it to her roommates. Lin Luo Xue and Li Shu Ci both struggle to find an excuse to not read it, but Lin Luo Xue finally bites the bullet and volunteers. Xu Lian Qiao asks to borrow the first version of Zhong Bai’s script to use for her video project. Luo Xue tries to warn her against reading it, but then decides to let Lian Qiao see for herself.

Xiao Hai Yang shows off a DVD he acquired from some upperclassmen — it’s his solution to the video project. But Ye Ji Ping shows up to check on how the roommates are doing on their projects. He reveals that he too has a DVD from some previous students, then calls out Lu Qiao Chuan to talk.

Ye reminds Qiao Chuan that he will be leaving soon. He’s disappointed that no one in the class is taking the video project seriously and tells Qiao Chuan he hopes he can lead the class better. They should look out for one another.

Feeling bad, Qiao Chuan heads back to his room, ready to tell his roommates that they should buckle down and get the whole class to actually film their projects. But Hai Yang, chastised, has done one better and called in a favor with his uncle to secure a filming location at his mountain village for the weekend.

Qiao Chuan’s roommates and Zhong Bai’s roommates end up being the only classmates who go on the filming trip. They’ve been on the bus for a few hours when Hai Yang realizes that he gave the wrong address to the bus driver. They’re headed toward a similarly-named village in the opposite direction. Qiao Chuan decides that instead of turning around, they should just go check out this other village. 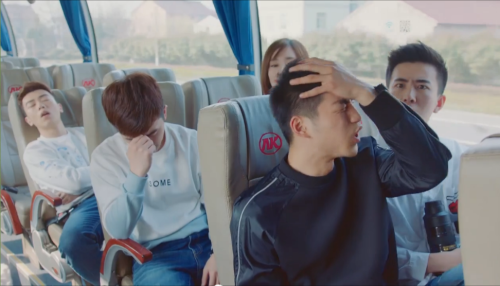 Yu Hao tries to persuade Ren Yi Fan to be his lead actor. He’s tempted, until he finds out from Zhong Bai that Shu Ci will be his co-lead. Delighted, he tries to ask Shu Ci to do a chemistry read with him, until Luo Xue reminds him of their bet. Li Shu Ci asks Hai Yang to be her lead actor — she’ll be the lead actress. He agrees without reading the script.

Ren Yi Fan is rehearsing with Shu Ci when Xu Lian Qiao shows up and asks him to be her lead actor. He annoys her and that makes him perfect for the part of her male lead. He habitually slips into flirt mode while interacting with her and has to remind himself that he’s “not that person anymore”. He seems hesitant to accept her request (which doesn’t phrase as a request so much as a command) so she switches tactics and pretends to flirt with him, which he falls for — hard.

Zhong Bai preps her camera while Luo Xue wanders around, seemingly stress-free. She tells Zhong Bai about her brilliant idea — take behind-the-scenes video of everyone else filming.

Qiao Chuan soon shows up, reporting that he has an initial price for food and lodging from the village head and needs to figure out how much to collect from everyone for dues. Things get a little awkward when Zhong Bai comes up with a simple solution that Luo Xue and Qiao Chuan quickly find flaws with. Luo Xue tries to find excuses to leave, which Zhong Bai seems oblivious to. Qiao Chuan and Luo Xue are finally left alone when Shu Ci and Yi Fan yell for Zhong Bai.

Luo Xue and Qiao Chuan continue to act awkward after she leaves. He tells her the news about Ye leaving after next semester, and asks for her support in his efforts to keep the class together.

Later, Qiao Chuan tells Zhong Bai the news about Ye, but she already heard from Luo Xue. Qiao Chuan quickly tries to explain why Luo Xue knew first, but Zhong Bai tells him that she’s open-minded and he need not explain himself.

She tells him that if they break up one day, she won’t hold it against him and that he should be able to date whoever he wants without feeling guilty. He shouldn’t feel like he owes her anything. Her phrasing echoes his conversation with Yi Fan over the summer. Naturally, he suspects Yi Fan of leaking their conversation to Zhong Bai. Once she leaves, he yells for Yi Fan to show himself.

Yi Fan denies telling Zhong Bai about their conversation, but has noticed that Zhong Bai hasn’t seemed herself lately. She doesn’t seem as happy as she should be, plus she oddly started trying to explain her relationship with Hai Yang the other day.